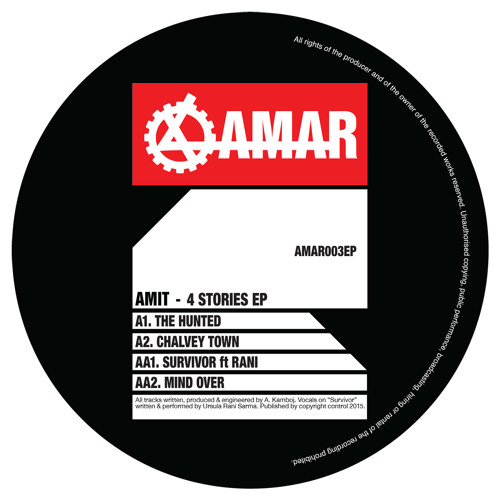 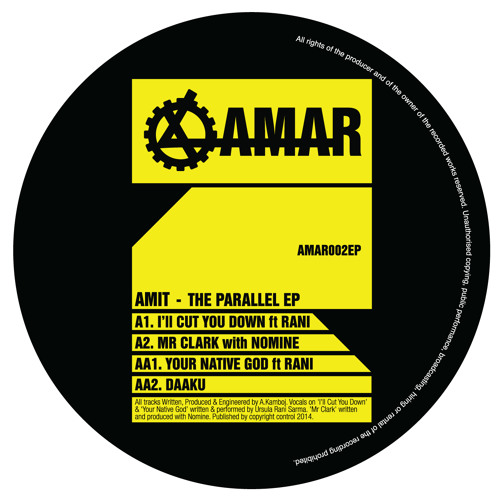 Amit presents the second release on his own AMAR imprint, once again teaming up with Rani for vocal duties and presenting his signature style at both 170 and 140. I’ll Cut You Down treads a similar path to Human Warfare, with chunky half-step beats and tons of atmosphere, while Mr Clark goes dark and hypnotic, combining heavy sub, an old school reese lead and intricate, syncopated percussion.

On the flip side the 140 tunes come out, beginning with the classic dub sounds of Your Native God. Horns, sirens and sub are all in full effect here but the whole thing still has that signature Amit creepiness. Fans of The Bug’s King Midas Sound project should enjoy this one. Last but not least, Daaku strips things back to the bare essentials and gets that old school lead back on the go for a tidy slice of modern dubstep.

Check out the clips below and watch out for this one dropping on vinyl and digital from March 3rd.

DNB Dojo head honcho Hex brings us a 40 minute mix all vinyl mix for the Sun & Bass DJ Competition spanning deep, drumfunk, liquid, techstep and neurofunk D&B. The tracklist speaks for itself with old classics sitting alongside new material – check it out now via Mixcloud.

The mighty Ulterior Motive have put together a rather tasty ‘All Headz’ mix ahead of next month’s Star Warz event in Belgium. Consisting of (you guessed it) nothing but Metalheadz tracks, the mix features a tasty range of tracks from the likes of dBridge, Break, Spectrasoul, Lenzman, Goldie, Ed Rush, FD and S.P.Y, spanning the range of Metalheadz material.

Check out the mix below, and if you’re in Belgium on March 2nd be sure to head down to Kunstencentrum Vooruit to catch sets from Goldie, Dillinja, Ulterior Motive, Jubei and Amit at the Star Warz Metalheadz takeover!

To celebrate the recent release of the beautiful Follow You Around / Contract single on Blu Mar Ten Music, Stray has compiled a top notch mix spanning all the styles of drum & bass. Starting out with some smooth liquid rollers, then venturing off into darker territory, and featuring some absolutely outstanding tracks such as Amit‘s Killer Driller before finishing up with the A side of the single, this is thoughtful d&b at it’s best.

Check out the single and the mix below!