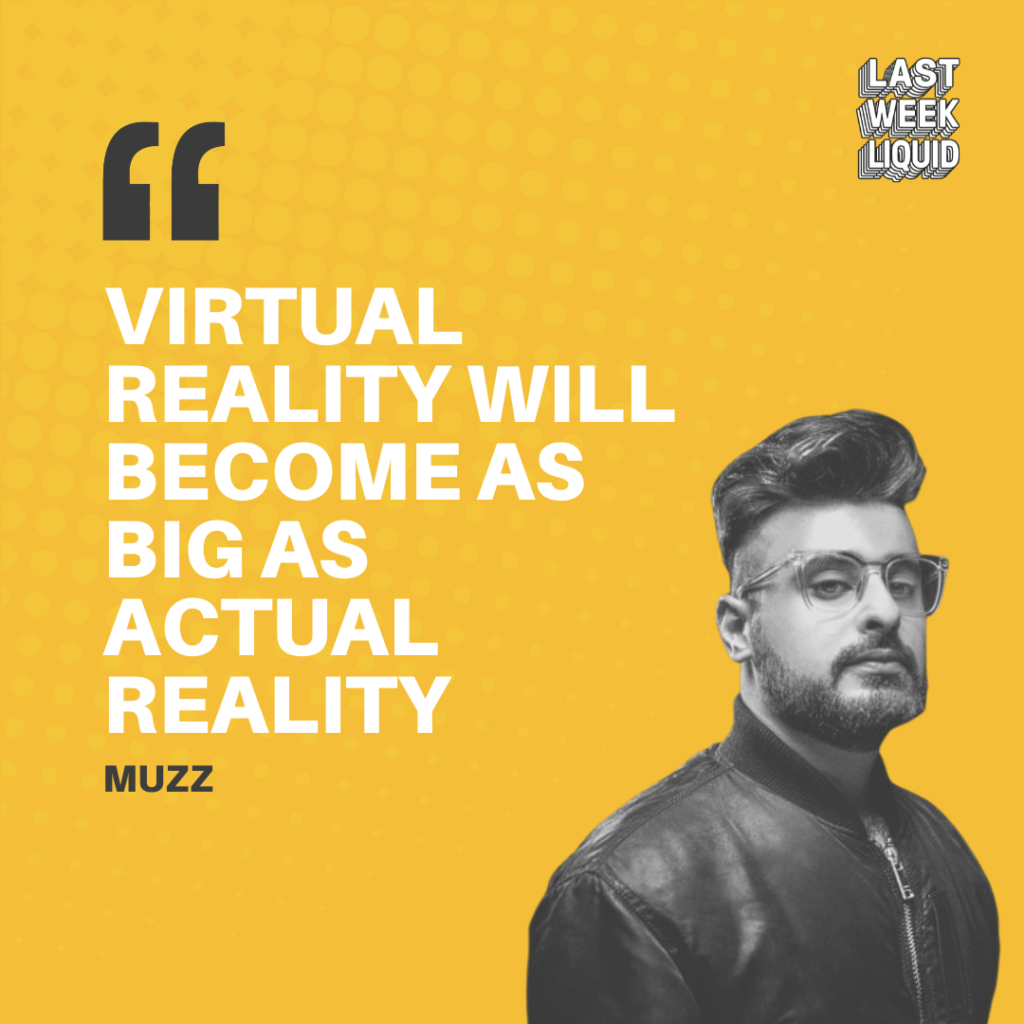 This interview is an excerpt from Episode 36 of the Last Week Liquid Podcast, a weekly show dedicated to the world of Drum & Bass, centered around discussions with producers, DJs, label managers and event organizers. Listen here.

“This is the OASIS. It’s a place where the limits of reality are your own imagination. You can do anything, go anywhere. Except for eating, sleeping and bathroom breaks, whatever people want to do, they do it in the OASIS. And since everyone is here, this is where we meet each other. This is where we make friends”. This quote was taken from the book Ready Player One, later adapted to the big screen by Steven Spielberg.

Set in 2045, the plot follows the protagonist as he sets off on a quest to find a hidden Easter Egg inside a worldwide virtual reality game called the OASIS. The OASIS, acting as both a virtual game and society, has become an escape from the world’s social and economic problems, allowing for anyone to do anything. Although virtual reality in 2021 is far from reaching these heights, technology is moving at a breakneck speed, and artists are pushing the boundaries of what “putting on a show” actually means.

Simon: So we’re actually recording this chat a few days before your Virtual Reality Tour kicks off. How are you feeling?

MUZZ: I’m really excited and nervous. I feel like we put so much love and care into doing this tour. It feels like we’re doing a real tour like we would in clubs and stuff. And yeah, I’m ecstatic; it’s a different platform for us and for the music industry, something more interesting than, you know, just going on Twitch or Facebook or whatever, setting up a camera and then just playing a DJ set. People want a spectacle.

When we did The Promise Land live show, even though that was a spectacle, in the back of my mind I’m just thinking “We put in all this effort, we spent all this money we did all this planning and then all that’s going to happen is somebody is just going to be watching it on their phone on a toilet or something”. So is it worth the agony?

With virtual reality, this is the closest you can get to experiencing a real live show; you are surrounded by other human beings right in front of your eyes, shoulder to shoulder. You can hear people shouting next to you. It’s mad. It also brings a whole new level of interaction with the crowd beyond a simple chat stream. In VR I can hear the crowd’s reaction like I would at a real show. If I’m playing dubplates or unreleased demos, I can hear how the crowd is reacting.

S: So on the Virtual Reality Tour, there will be different guests and different supporting acts for each evening. I’m trying to wrap my head around how that actually works in practice?

M: Some of them do it 100% live. Some of them do it pre-recorded. Obviously, we spend a lot of time coordinating with DJ’s, and every night that you come on, the tour will have a completely unique lineup. There are no repeat artists. Some of them are live, but the problem with doing it live is it’s risky. Virtual reality is still in its infancy. There are still some things to iron out. The technology is still a little bit out of reach for the majority of people, especially those new to VR.

But the other nice thing is the social aspect of it. You can speak to the DJs as well, you will be able to speak to them as if they’re right in front of you. In real life a lot of DJ’s do feel hesitant, especially the larger ones, to just go out in public, in the crowd and go mingle with people and stuff. And if you’re feeling like if you don’t want to be there, you could just take off your headset.  It’s nice because you can have that one-to-one interaction again, as you would in real life. It’s better to have that than just sending a twitch message or just seeing a huge line of text messages doesn’t feel like you’re there.

S: Do you see any risk of people going too much towards the virtual aspect of music and festivals, and forgetting the physical world? Or do you think there’s always going to be a place for both to coexist?

M: That’s a really interesting question. When I go and speak to people like ravers and DJ’s, a lot of them have come back to me and said: “You know, what? Before all this pandemic I was a raver, I would go to clubs all the time and see all these DJ’s, and then I discovered VR and I’m like you know what? After the pandemic I might not even go back to actual clubs”. If you think about it, especially for women, when I speak to them, they tell me: “We can go to these parties, we know we’re safe because we’re in the comfort of our own home. We know we’re not going to get spiked, mugged or that somebody will be groping us. We can get drunk and then just slip into bed immediately after”.

People have said it was actually really liberating to have VR as a platform to go clubbing. Not just for safety, but just the fact that they can look however they want. In VR, you can be anything, or anyone. I remember seeing one guy’s avatar and, I swear to God, this guy’s avatar was a McDonald’s restaurant. Just the whole McDonald’s. It’s mad, it’s crazy. I think a lot of people have discovered this platform and I think people will continue to use it. I don’t think it’s going to completely die out or trickle away after the pandemic. On the contrary, I think there will be a new base there that’s now permanent. As I said, some people just prefer it now. And it’s completely understandable.

Affordability is still an issue though. To do VR with the full body experience is not cheap. You have to have a very powerful computer, and these things cost thousands. The full VR experience and the software itself for platforms still need a bit more development, they’re still in their infancy. Another key element is the ticketing system. Right now, people expect most things online to be free – most Twitch streams, whether they are music-related or not, are free for example. It’s not so much people’s fault though, it’s just the way that the market has gone.

But that will need to change in order to bring VR to the mainstream. If all those things can get sorted, then I believe VR will be as big as reality. It will get so good to the point where it just becomes indistinguishable. Or it could even, way in the future, just replace what is going on in reality. Now, whether you think that’s a good thing or a bad thing, that’s a moral dilemma. But that is the way things are going I think.

S: Yeah, I love what you said about women’s safety. I’ve never really thought about it, so my first thought was that VR could be stealing market share from actual events, but from what you’re saying and what I’m starting to understand is that it’s actually expanding the pie to people who might not feel comfortable going to actual events.

M: Absolutely! For example, I’ve got a friend of mine who has a form of social anxiety. So what you can do in the game is if you don’t want to speak to anyone, there’s a button you can just mute everybody and you can turn off all of their avatars and you could just be in your own space. You’re only hearing the music. Whereas if you want the full experience, if you want everybody around, you can turn on all their avatars and suddenly you’re in a room with everybody around you again.

The possibilities are endless. And we haven’t even talked about what you can do with the venue. You get to create anything with the light shows for example, you can do stuff that’s impossible in real life. You can put on low gravity so everything is jumping around. You are only limited by your own imagination really.

S: Where does your passion for virtual reality come from then? Were you a gamer when you were a kid?

M: I had absolutely no passion for it until I discovered it back in October. I’m not really a huge gamer. I played very casually when I was younger, and still play casually now, just party games and stuff with my friends, but nothing more than that. The thing is, I was feeling really down about not doing events and not seeing the fans. And I was really down about not being able to play my album out, which was a huge thing. I never got to play any of the tracks other than a few demos. I think it was my friend Justin Hawkes who introduced me to VR during that time. He asked me if I wanted to hang out in VR and told me he knew somebody running a party.

So I went there, and when I arrive, I’m literally in a nightclub, I see other DJ’s there and I’m seeing people literally DJ and I see an LED screen. There’s a promoter there, there’s fans there, jamming and dancing in VR, and I’m just like, holy shit…I’d never seen anything like it. I felt like a novice again, which is such a nice feeling. I don’t like feeling like a professional, I don’t like feeling like the guy who knows everything. I like feeling like a child, the 14 year old me when I was discovering art and everything. It was nice going into a scene that I knew absolutely nothing about and just learning from scratch and making connections and just have that feeling that I used to have.

Listen to the entire interview over here, or simply search for Last Week Liquid Podcast on your favorite podcast app.

Check out the Virtual Reality Tour over on MUZZ’s Discord