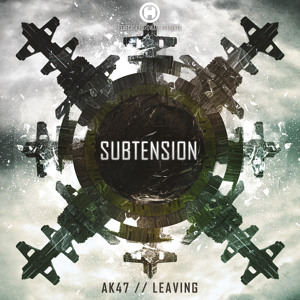 We’ve been keeping a close eye on Subtension ever since his rather tasty Black Haze 12″ dropped for Samurai Music last year and his latest release for the veritable Hardware imprint doesn’t disappoint either. AK47 kicks things off with a rolling break and staccato bassline rhythm doubtless designed to invoke the rapid fire of an assault rifle; it’s a neat sonic trick and an innovative break from the usual neurofunk bassline fare.

Leaving sees the young Slovakian producer moving into more experimental territory, retaining the bassline grit we’ve come to associate with labels like hardware while playing with a drum rhythm more in keeping with recent material from Exit or Diffrent. It’s nice to see Hardware willing to push the more experimental side of 170BPM music; more of this please! Last but not least the digital buyers amongst you are treated to a third track in the form of Offset, which proves a tasty if somewhat formulaic slice of rolling techstep.

Worldwide release hits on October 13th but if you can’t wait til Monday you can get your grubby mits on this one on vinyl or digital from the Hardware store. Check out the clips below and get your orders in!