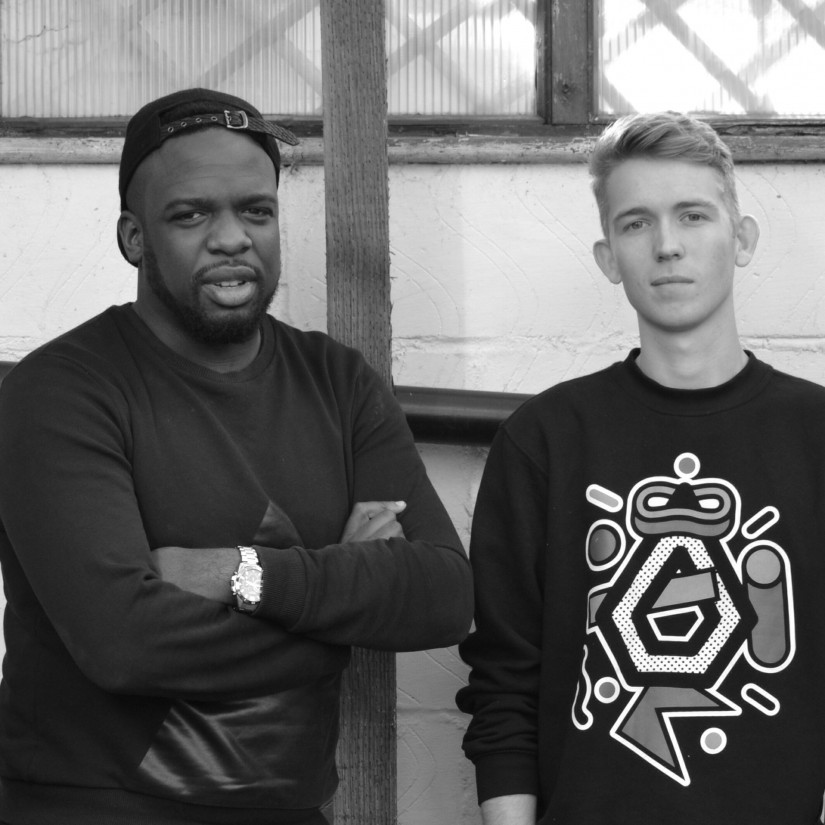 With a new EP out on Soulvent and affiliations with Spearhead, Med School, MTA and more, 2017 has been a big year for GLXY! The intrepid James Austin tracked them down to find out about their latest beats, their collaborative process and what’s next for the rest of the year…

DNB Dojo: Pardon the GLXY related puns, but you’ve had quite the ‘meteoric’ rise over the last few years. You’ve shot up the ranks working with labels like Soulvent Records and most notably your EP on Spearhead – not to mention some impressive remixes for Submotion Orchestra, BCee and the mighty London Electricity. Was there ever a moment where you thought ‘we’re going places’?

Tom: For both of us I think landing the Submotion Orchestra remix was a turning point. Was a massive opportunity to get our name and sound on the radar and I think it did just that. Following that, getting the first bookings in acted as a real motivator for us. Since then, things have just been growing really organically, and most importantly we’re enjoying it and not necessarily taking ourselves too seriously.

JC: Yeah echo what Tom said really, that Submo remix was a big moment, I think at that point only S.P.Y and Alix Perez had done D&B remixes for them!

DD: Over the years you’ve demonstrated impressive talent crossing across the sub-genre’s of D&B. Your Astoria / Overwatch release on Limitless was more akin to an Ivy Lab x Alix Perez collab than your own catalogue, and you’re also adept at working with more jungle-tipped tunes. When you come to write your material, is there an end goal in sight…’lets write a deep roller’ or whatever…or is it just seeing where the moment takes you?

Tom: I wish we had a good philosophical answer to this! A lot of the time we just follow our nose with where a track goes, which means deeper tracks turn in to liquid tracks and vice versa which is potentially where some of the “GLXY sound” comes from. But importantly, we definitely don’t limit ourselves to one sub-genre and love trying out different ideas, including non drum & bass – keep watch for those!

JC: Absolutely, we listen to so much music outside of drum & bass it’d be a crime to limit ourselves. We’ve never really planned what style to make, it happens pretty naturally. You’ll no doubt continue to hear that in our upcoming releases.

DD: Unlike other areas of the scene, your music is very emotionally charged. How reflective of your actual moods are your tunes? Does moody input make moody output?

Tom: Not reflective at all! Personally, I just love making beats so whenever Ableton is open I’m definitely not moody. However, both our influences come from a lot of music outside drum & bass, especially jazz and soul for me. These are inherently emotionally charged genres and that definitely filters through to our production.

JC: I think that happens subconsciously, we’re both “traditional” musicians at heart, with Tom playing Sax and keys and myself playing guitar. In that scenario it’s very easy to convey emotions as you’re literally physically connected to your instrument and they more often than not have some sentimental value. With electronic music that same connection isn’t always there but I think we manage to infuse a decent amount of “soul” into the tunes.

DD: Speaking of moods, surely working as a pair requires a healthy working relationship? Do you get in moods with each other when you’re in the studio? Can your personal emotions get in the way of writing material?

Tom: Being a duo definitely requires a good working relationship and we are fortunate to have that. This is probably down to us having very similar tastes in music (most of the time…house music is a touchy subject) so we are nearly always on the same wavelength, this definitely plays in our favour when DJing too. Very very occasionally though, we do disagree on a track and where it should head; it’s unavoidable when two creative minds meet. However, this is a very good quality control method for us; our most successful tracks are the ones we both love.

JC: Yeah I think if you ask any duo they’d be lying if they said they didn’t bicker like an old married couple! It’s how the GLXY sound comes about, a compromise between two creative sources. Also it means we can have a pretty simple rule that if we’re both not feeling a track, we shouldn’t really release it.

DD: Let’s talk a bit more about this new EP. The track title is all you need to know with Bloo; was there a trigger point though? Was it a particular element of the tune that just naturally evolved, or were you just busting to create a ‘blue’ record?

Tom: This track literally came together in about 2 hours. I got the sample rolling with the bass and drums, Jon came in and added the musical elements and extra energy and that’s the version that got released. The “blue” vibe just stems from the original sample, detuning it slightly over a piano line we created produced the melancholic vibe you get from the track.

JC: The beauty of this track is in it’s simplicity, start with a really good sample and build the sounds around it! It’s one of those tunes that rolls on and on and is easy to mix (DJ’s dream!)

DD: Butterfly Effect features Hugh Hardie and Visionobi. You guys and Visionobi are all originally from Hertfordshire, was that part of the link up here? How did all three parties come together to create this one?

JC: We actually met Rich through a mutual friend, and we just happen to be on the same agency as well. We’d been planning for ages to write a tune with him so the timing was just perfect really. We’ve known Hugh for a few years now and have become good mates. We actually got this tune rolling when I went down to hang out at his one weekend in Bristol. Hugh’s style compliments ours and he’s one of our favourite producers out so I wouldn’t be surprised if there are plenty more collabs to come in the future, we’re two down already!

Tom: Yeah we’ve been lucky enough to play quite a few shows with both these guys recently so we know and get on with each other quite well. That naturally lead to a collaboration forming and we’re really pleased with the result. It’s one of those collaborations where you can hear everyone’s styles and the end product is a personal favourite of our catalogue.

DD: Cylindrical features a voice I’ve heard before in Overwatch, unless my ears deceive me? Is it one of you guys? It’s not uncommon for D&B producers to use their own vocals (Calibre & Alix Perez being notable examples)

JC: They’re actually two different samples both from packs if I recall correctly. Most producers will relate to the pain of going through pack after pack just to find a decent, usable vocal sample and these two were no exception! I wish one of us had a decent singing voice, would definitely make the whole process a lot easier!

Tom: Unfortunately none of us are gifted vocalists…yet! Secret fact though, our track Inside on the last EP we did with Soulvent is actually me (masked with loads of effects though). The fact neither of us could lay down a vocal has also had a positive effect though – we’ve had the chance to work with loads of great vocalists. From the up and coming talent of Blake to the hazy tones of James Robb on our Pilot single, each vocalist we bring in on a track always adds a nice twist to the instrumental and they always smash it!

DD: FD’s Lonely remix gives the whole EP a different edge. Was there a decision for the EP to be punctuated with something grittier, or is this the product of his unrestricted musical process?

Tom: FD is someone we’ve followed for years and have continually rinsed tunes of. I mean Serious is an all time anthem! So he was one of the first people that sprang to mind when we decided we wanted a remix. We gave him no instruction with it as we knew he’d vibe something out for us. Again, he’s able to write a variety of styles which I think is important in this game!

DD: We’ve seen you rubbing shoulders with Shogun & Hospital talent – can we expect those ties to grow closer?

JC: It’s probably just by coincidence that we’re mates with a few of the Hospital and Shogun lads, they’re all just really nice guys and I guess there’s a bit of a “crew” vibe with us, Hugh, Pola & Bryson, BLAKE etc. We definitely have great relationships with both labels’ staff for sure!

DD: What else can we expect from you both in the next 12 months?

Tom: Yeah busy writing time for us at the moment preparing our next bunch of material – some exciting ideas are brewing! As I said earlier we’re also dabbling in some downtempo stuff which might see the light of day at some point, might drop a mixtape along with them who knows!

Finally, cheers for this interview! Some great questions, hope you’ve gained an extra insight to this EP and how we work in the studio. Peace, JC & Tom

GLXY’s Butterfly Effect EP is out now on Soulvent; check out the clips below and hit up your favourite digital retailer to grab a copy.