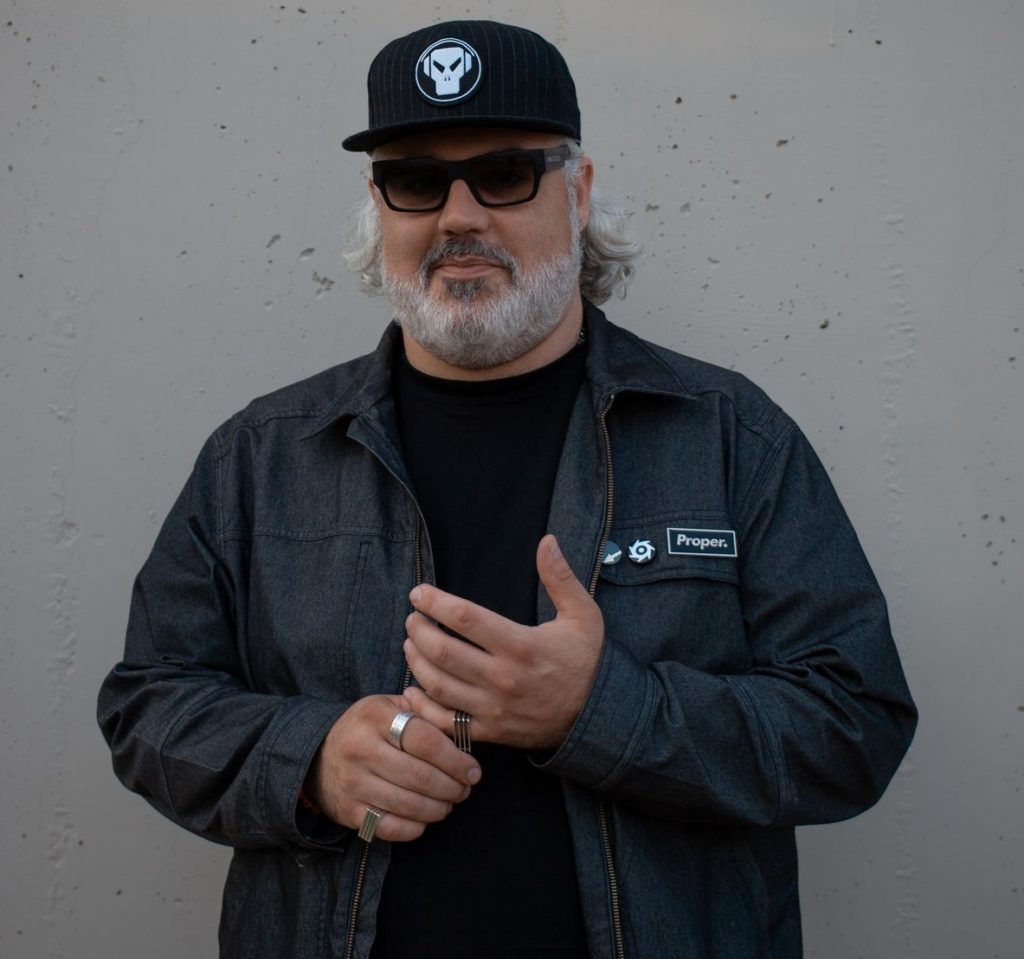 John Rolodex’ latest work sees him returning to the mighty Metalheadz for the first time in over a decade, and bringing his first solo EP for Goldie’s esteemed imprint. To find out about all things Rainmaker we caught up with the veteran Canadian producer for a chat. Read on for the skinny…

DNB Dojo: Ez John, how are you today? Hope you’ve been surviving the current pandemic situation with your sanity intact!

John Rolodex: Cheers! I’m managing. Like anybody, I’ve had challenges this year, but I’m in a good place overall. Three months away from the day job allowed me a ton of unplanned time in the lab and the time to completely overhaul my studio…so that’s an upside.

DD: So your latest work lands on the legendary Metalheadz, sixteen years after you last appeared on the label. How did the new EP come about?

JR: A lot of people don’t realize I was signing tunes to ‘headz when my first EP on Dread was still on test press in 2002. Back in the early 2000s, I actually had a lot of material signed with ‘headz and was touring as a Metalheadz artist. Due to a confluence of factors, Novocaine (with Synoflex) was the only track to be officially released. Some of the others have been released more recently on Machinist. All of this is to say I have a history with Goldie and with Metalheadz.

Anyway, my relationship with drum and bass seems to go in cycles. Around 2013 or so I sort of hit a wall and decided I was finished. I started another music project and moved on. But there was a nagging sense that I hadn’t completed something.

After a couple years I came back around and started making D&B again. I decided if I was going to pursue this again it had to be personal and really mean something. In fact, yesterday somebody told me that’s called ‘Beethoven Syndrome’. Anyway, I started sending music to Goldie again in mid 2017. In January of 2019 he started to sign stuff again.

DD: You released on some other high profile labels back in the day, including Dread and Tech Itch. Any chance we’ll see new Rolodex popping up on either of them in the future?

JR: I’m proud of those early releases, but any new material along those lines will likely come out on Machinist. I’m concentrating on Metalheadz and Machinist material at the moment.

DD: Digging into the EP, the opening track The Rainmaker is really special; between the bleeps and the vocal it brings to mind ‘headz classics like Up All Night and Obsession. What was the writing process like for this one? And how did you come to work with Khadija on vocals?

JR: The process actually started with the piano and orchestral strings. Around the same time I wrote the lyrics about something that happened in my personal life. I usually write most of the lyrics and ask the vocalist to come up with the melody. That’s how this went down. When we tracked the vocals there was no drop, no bass, no drums, just an intro.

Khadija and I go back a long time. She’s from Edmonton as well and we’ve recorded many times and even performed together once or twice. People might recognize her name from That Jungle Vibe that we released with T. Power on V Recordings a few years ago.

To evoke a couple classics like Obsession and Up All Night makes me smile. I think Obsession was the first track that made me think you could reference an entire catalogue in one track, and I can’t pretend I wasn’t also trying to do that. But I wanted it to sound like me at the same time and I hope I’ve also accomplished that.

DD: The whole EP feels very steeped in D&B history; Interdimensional Espionage reminds me of old Moving Shadow records from the era around releases like Drumfunk Hooliganz. Was there a conscious choice to call back to some of these older releases?

JR: Not really, to be honest. The bassline was the jumping off point. And then I heard it in my head with this particular breakbeat in this particular pattern, but my copy of this break was poor. So I hit up a breakbeat librarian friend to get a better version and built the kit to sound as modern as possible but with that original break feel.

I’ve been on this spooky detective jazz vibe for a while now. Looks Like Trouble which came out earlier this year as well as a few other new unreleased ones are on the same tip.

I think the goal was to be a little deep, a little funky and a little breaky but not too complicated with this one. It was more of an exercise that happened to work out.

DD: I love the use of dialogue samples on Espionage. Where do these come from? The sample seems really familiar but I can’t quite place it.

JR: Eh… gonna take a page from the great legend, Kool Herc. I don’t give out breakbeat names or sample sources. Can’t blow up my spot ?

DD: It’s not just the music you’re behind on this EP – I understand you did all the artwork and the video for Rainmaker too. What inspired you to take full control on this release?

JR: Ego, probably, hahaha. When I was a kid, I thought I’d grow up to be an architect or a painter or a sculptor. I like to think my creativity can be applied in many different ways. I look up to people like David Lynch, Charles and Ray Eames, Gorgio Moroder and the bossman, Goldie, of course; people who can innovate in multiple fields of creative endeavour. So for me making the music, doing the artwork, shooting and editing the videos, that’s my way of expressing that desire. Or fulfilling it, I suppose.

DD: Both the artwork and the video feature some intriguing symbols. Is there any kind of puzzle or hidden meaning to be found here?

The symbols are a cryptogram from a cipher I developed. The message references the lyrics in The Rainmaker and my personal connection with headz. That’s all I want to disclose for now. But I’m hoping people will get to see this cipher deployed again soon.

JR: I’ve got more material forthcoming on Metalheadz including a remix, but I’ll let them handle the announcements. There’s so much going on at Metalheadz right now. It’s incredible to be a part of it.

As far as Machinist, we’re celebrating our tenth year and we have a few things planned around that. The first installment of MACHX will be out before year’s end. It’s got some killers from NC-17, my label partner Dioptrics, and Machinist alumni SDS and Sureshock plus a couple remixes from Nuphlo and myself on that. We’re also developing more material with Nuphlo, SDS and a few others. Dioptrics is working on another devastating release and I’m working on parts three and four of the reflection series (Fingerprints EP and Blueprints EP being the first two). So there’s a few irons in the fire. We’re starting to scope out more artists to work with, people who like our sound and want to grow. If you’re reading this and that’s you, hit us up.

DD: Last but not least, give us your top 5 tracks from the ‘headz back catalogue

JR: This is impossible with such an incredible catalogue, but here goes (no particular order):

DD: Thanks for chatting John!

You can check out the full set of clips from The Rainmaker below; the EP is out now at all good digital stores.