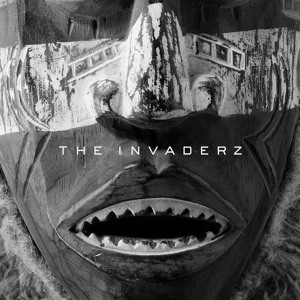 The Invaderz have had a busy year, the highlight of which is undoubtedly their debut LP for Commercial Suicide. Showing off the trio’s varied production styles, the album covers all the different flavours of D&B from mellow liquid rollers through grimey tech business and out into full-on bangers.

To find out a bit more about the album we caught up with the gang for a quick Q&A about their creative process and how the LP came to be. Read on…

DNB Dojo: Hi Guys! Thanks for taking the time and congratulations on the new album, sounding big! After such a long career based on singles, what made you guys decide to go for the album now?

Matt Invaderz: Thanks a lot! We’re really happy with how the album turned out – hopefully it gives a broad idea of what Invaderz is all about.  The album is quite varied in terms of different styles etc. and hopefully having them all together as a whole sums up our approach – we don’t really focus on one style, it’s all Drum & Bass to us, and as long as all three of us are into it then that’s all that matters!

In terms of why we decided to go for an album at this point, it wasn’t really a conscious plan – we’d been talking about doing an album for quite a while but didn’t want to just make a collection of dancefloor tunes that would be forgotten about in a couple of months time, we felt that it was only worth doing an album if we could do something with a bit of depth, which would hopefully still be enjoyable to listen to as time goes on. The album tracks were selected from a range of about thirty finished tracks, so there’s plenty more to come.

DD: You recently reappeared after a fairly lengthy hiatus from the scene, can you give us the story on where the Invaderz team disappeared to and how you’ve come to be back together and writing D&B again?

Matt: It’s really funny that the common thing that keeps being said about us is that we’re back after a long hiatus/massive break etc. as to us it feels like we didn’t really go anywhere! We’ve kept consistently putting tunes out and regularly working on new stuff all along…however, we feel that often our releases might get overlooked for the very thing that we think sets us apart from a lot of other D&B producers, i.e we like to make a variety of styles all across the board – it makes us hard to categorise and hence it might have been hard for people to identify what our sound is all about. Some of our biggest tunes have leant towards the more musical side of D&B but when you check out our catalogue as a whole, or when you hear Darrell DJing it’s obviously not just that.

We’ve been involved in D&B almost from the very beginning, and one really important thing for us has always been to link back to the history of the music with whatever we produce. Up until a few years ago this was always a given, but I think it’s less and less common nowadays as the music has become so fractured, and probably because there’s now 20 years worth of history to incorporate and draw from. What’s classic and old-school to us, and to those who really know the history of the music, might not even register as Drum & Bass to a lot of people! One thing to say though is that for producers who started in the era that we did (pre-internet), it’s quite a hard thing to adapt and get used to the modern way that music gets heard – if all you’ve ever known is blogs, downloads, forums etc then you wouldn’t know any different, but we came up in a different era of P&D deals, white labels, dubplates and national radio shows; a completely different setup, which had it’s pro’s and cons. However we feel that the old way definitely provided a kind of quality control that isn’t so apparent in 2014.

DD: Last year’s After Midnight 12″ was your first appearance on Commercial Suicide, how did that come about, and how did it progress from there to an album release?

Matt: We’ve known Tom (Klute) for ages, and when we talked about doing an album on Commercial Suicide it seemed to make perfect sense. All along he’s gone his own way with the kind of music he releases, and like us, he’s completely un-concerned with passing trends; as long as it’s quality forward-thinking music with depth to it then that’s all that matters. Having an externally imposed deadline really gave us the impetus to crack on and finish a bulk of tunes all at once, and we’re really happy with how it’s all worked out. After Midnight came from a few days of sessions that we did with DJ Marky when he came up to our studio to hang out – Tom heard the tracks and really liked After Midnight, he asked to put the track out on Commercial Suicide and of course we said yes immediately!

DD: How does the three man team work together in the studio? Are there set roles or is the creative process fairly fluid from one track to the next?

Matt: We don’t have any set process in terms of how the tracks are made – one of the things that keeps it fun for us is to continuously try different approaches and to try and constantly incorporate new sounds/techniques that could come from anywhere. Having made the point earlier about not being concerned with what’s “current”, we also understand that music can’t exist in isolation, particularly if you want to get played in people’s sets, so we try to keep a close ear on everything that comes out, and always try to get tips from other producers that we talk to – watching someone else work can often clear the cobwebs and re-inspire you to approach things differently.

More often than not, a track will start with a loop that one of us has put together, and then the three of us will finish it together in the studio. We try not to be precious with our ideas, and are happy to mix and match parts of different demos to create the best end result, often trying out the music from one idea over the breaks of another, just to see if we can come up with something fresh and unexpected. In terms of set roles, there really aren’t any, but suffice to say we’re all aware of our strengths and weaknesses. It’s easy to be obsessive about details and get tunnel-vision – working with 2 others means that you constantly get a different perspective so it can snap you out of that. Three is the magic number and we stick to the principle of “majority decides”!

DD: With the album under your belts, what’s next for the rest of this year and beyond?

Matt: After the album release is out of the way we’ve got loads of tracks and collaborations lined up and ready to go. The plan (if there is one) is to be as consistent as possible with our releases and hopefully build on the interest and attention that the LP has generated. Working with different vocalists is something that we’d really like to do more of in the future, particularly with the experience that I have in this area from my past work with Bugz In The Attic. The track Addicted from our album is an example of what we feel makes for a successful vocal production – a strong chorus and well-written song over quality D&B production, without compromising either element. Deleelah (vocalist on Addicted) absolutely smashed it with her performance and the way she works, so big thanks to her! Our focus is always to incorporate the elements that made all three of us love Drum & Bass from the very beginning, so we’ll be trying to continue in that vein and hopefully put out as much new music as possible!!

Darrell: We should point out here that we have a follow up single on Commercial Suicide planned for the new year as well as tracks we have signed to Dutty Audio and Ingredients. We are also finishing a remix for the next MC Fats LP and a remix for Randall’s Mac II label!!

The New Found Dialect LP is out now on vinyl and digital. Check out the clips below and head to the Commercial Suicide bandcamp to grab the album.