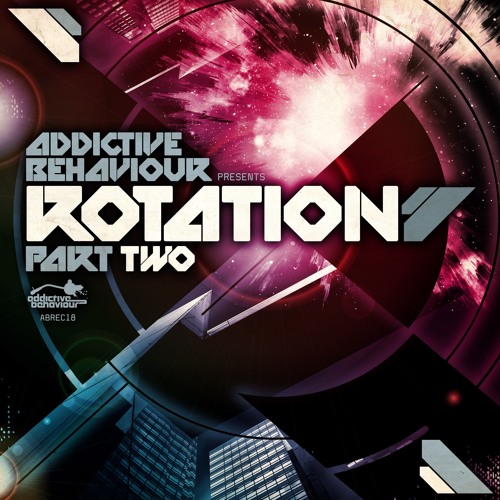 Addictive Behaviour have had quite the year, building on past successes with new releases from Eastcolors, Minor Rain and Handra, following the label’s solid formula of a slow but high quality release schedule. Their latest project, out a few weeks ago, sees them return to the Rotation LP series started in 2015 with 14 big new tracks from the likes of Philth, NickBee, Data 3, Detail, Fade and more. To find out a bit more about the album and what’s next for the label we grabbed bosses Clayton and Neil for a chat…

DNB Dojo: Ez guys, thanks for chatting today. How are you doing?

Clayton: All good thanks. Just sitting here listening to Xanadu’s guest mix for DNB Dojo, and massively pissing off the neighbours all at once…what a brutal selection!!

Neil: Yea I’m good. Cheers. Just returned from a holiday in Scotland so nice and chilled and looking forward to getting back to the grind.

DD: Rotation Part Two sees you bringing a lot of new artists into the fold alongside some familiar Addictive names. How did you go about selecting material for the album. Did you seek out specific artists to request material, or does the LP represent the best material landing in the Addictive inbox?

C: Most of the tracks came from artists we approached specifically for the album. Three were demos Neil and I just couldn’t ignore…

N: Yea as the label has grown we’ve had to get increasingly selective about who we work with. But albums like this usually start with us agreeing on some names and then being added to when something extra special lands in the inbox.

DD: If you could have signed a track from any other artist in the scene for the LP, who would it have been and why?

C: It’s almost impossible to single out one…hmm any artist you say? Would have to be Dom & Roland, every tune on his Last Refuge of a Scoundrel album leaves the spine tingling.

N: What anyone?? Err, well I would have to agree with Clay on Dom & Roland. But if I had to pick another it would probably be Break. The fella just comes out of nowhere with LPs loaded with pure class, start to finish.

DD: The LP also gave you a chance to throw your second event recently. How did it go on the night? How have you found the business of running club nights compared to your experiences running the label?

C: The party wasn’t announced till just over a week before, so it was a nice surprise to see so many heads turn up and the venue nicely fill out. Every one of the DJs and MCs smashed it from start to finish, yep very pleased! A night to remember…arranging club nights doesn’t really have much in common with running a label. Well apart from artist selection! Luckily Neil and I have a past history in events promotion so we know the ropes!

N: The launch party was a real proud moment for us. Just getting a lot of the artists from the LP down to spin their tunes was great to see, as was seeing the crowd jumping around to them all night. I also had the pleasure of finishing off the night which was a great feeling. Sorting out the parties on top of the label can be exhausting but we enjoy all the hype leading up to it and it’s well worth the effort when it all comes together.

C: December 16th will see us team up with our friends over at Soul Trader Records to host Bar 512 in Dalston, East London. Some of the artist’s representing will be Zero T, Ed:it, Philth, GLXY, SATL, Sense MC, In-Reach crew and more! Label wise before the end of the year will be an EP from St Petersburg fresh blood Nami. We’re all really hyped for that! Nami will also feature heavily on the label roster throughout next year.

N: Yep looking forward to finishing off 2016 with the Xmas shindig alongside Soul Trader. And next year there’s going to be a lot more parties and a lot more artists on Rotation 😉

DD: Last but not least, give us three tunes that have been on heavy rotation in the Addictive HQ lately.

You can check out clips from the Rotation Part Two LP below; hit up your favourite store to grab a copy right now and watch out for Xanadu’s exclusive mix for DNB Dojo dropping very soon!