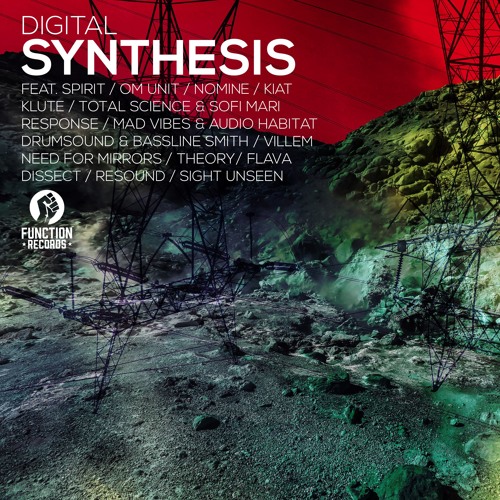 DNB Dojo: Ez Steve, how are you doing today?

Digital: I’m fine thanks, although I’m sitting inside penning interviews while it’s sunny outside! Jokes aside I’m feeling good and it seems like the album is being received well so I’m happy.

DD: So your new LP, Synthesis is out now featuring no fewer than sixteen collabs! How did the idea for a 100% collaborative album come about?

D: For a moment there I seriously got hooked on collabs due to the social side of things. I enjoy hooking up with artists for a drink and a bit of dinner and whatever…due to this I had several good collabs sitting in front of me. I got a feeling the idea of Synthesis was something that could take these good vibes further, show everyone there’s a bit of togetherness out there and furthermore, complete an album with diversity.

DD: I understand you did all the collabs in person, was that difficult to arrange? How far did you have to travel?

D: Not all of them, about 80%. It wasn’t difficult to arrange as I’m on good terms with everyone involved so I wasn’t scrapping around chasing people. There were one or two problems towards the end only a few days before mastering but Super Spirit flew down from wherever he lives and saved the day!

DD: Who has the best studio that you visited for this album, and why?

D: Response’s attic studio is great because he has a lot of hardware to play around with plus we can whack it up loud when we need too. Also he has a few friends passing through so the vibes in his studio are great throughout the day. The best thing about it is the fact he uses Cubase, I use Logic, so it means he gets the square eyes while I point, moan and play on the keyboard! Don’t worry; he gets his own back twice over when he’s at my house!

DD: Many of the tracks on the LP feature your frequent sparring partner Spirit. After all these years, is it difficult to keep your collabs fresh?

D: We pretty much work the same as we always have. We don’t follow a certain way of doing things, we just mess around with no particular direction at first (almost like we don’t know what we’re doing!) and then at some point something clicks. If we only had the vibe for one style of track I think we’d sound pretty stale by now, fortunately, the two of us enjoy all kinds of music outside of D&B so we randomly inject vibes from other genres as well.

DD: Synthesis seems to feature a lot of throwbacks to the older jungle and 90s techstep sounds…was it a conscious decision to make slightly retro sounding tracks?

D: It wasn’t a conscious decision. Think about it, Digital & Villem – Bug Eye. Not even I saw that coming from myself and Villem but we had good fun making it. The typical thing I’d expect from us is Sun Bites, a track forthcoming on Metalheadz which has rolling breaks and a good bit of music to it, kind of deep liquid but tough. So look out for that one!

DD: What’s next for Digital and Function looking forward for the rest of 2016?

D: I’m taking it easy after this biggy. September / October will see the Synthesis Remixes. In November I’ll release a 10” on Function Dubz featuring myself and Marcus Visionary. Hold tight for those!

Check out the clips below and hit up the Function Store to grab Synthesis on vinyl or digital right now!