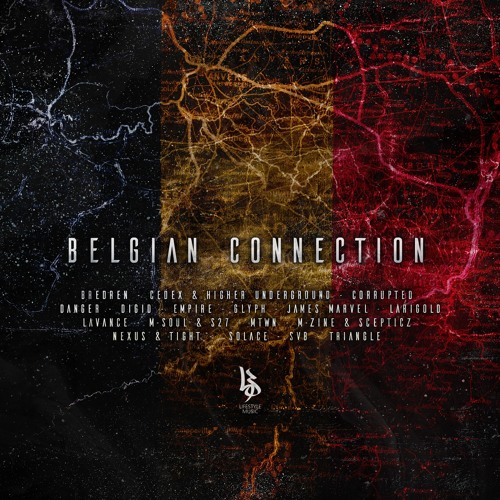 As they gear up to unleash their brand new Belgian Connection LP, we thought it was high time for a little knees up with Lifestyle Music. Read on for the full lowdown on the album, the label ethos and their favourite tunes right now, plus we’ve got the exclusive premiere of Glÿph – The Megalodonist!

DNB Dojo: Hi Guys, thanks for chatting with us! Where are you today and what have you been up to?

Lifestyle Music: Currently in sunny Brighton, recovering from a crazy weekend which included going to London to meet The Dreamers crew (Big up Neve, Synth Ethics, Was A Be & QZB) and then the Critical BBQ Event. Holy shit, what a day that was!

DD: So the latest Lifestyle release focuses on the hotbed of production talent coming out of Belgium. How did you first hook up with the Belgian crew, and how did the album concept come about?

LM: We released the Australian Connection last year, which was the starting point for us to release country specific albums. It was a real landmark moment for the label and went down really well, so then we started looking at where to go next. We first had involvement with the Belgian artists M-zine & Scepticz after they released their Prescient EP early in 2017, which partly spurred the idea to focus on Belgium, as well has generally seeing how much talent was in the country.

To be honest though, this is more a massively elaborate ruse to go there for the beer and chocolate…

DD: The album features a really diverse array of styles, with tech, liquid and halftime all represented. Was this a deliberate choice to reflect the current state of the scene, or just a result of being sent a lot of different styles?

LM: It has been deliberate, I guess we just didn’t want to limit anybody, so we approached some different sounding artists from the get go…for instance Nexus & Tight is more known for his liquid, Bredren for their tech, then somebody like Corrupted who comes in with some mad half time. It was a crazy flurry at the end, the word got out to the producers in the country and we ended up signing an additional six tracks in the last month.

In terms of the style though, really and truly we are just drum & bass fans, and drum & bass can mean a lot of different things these days. When you’re looking to curate an entire country’s scene, it’s better to be open to all of it!

DD: Are there plans for follow up ‘Connection’ releases focusing on other countries? What other nations would you be interested in putting the spotlight on, and why?

LM: Yes we are indeed, we’ve had great fun with these projects, meeting new producers and going out to the countries, we’d be stupid not to continue. There’s quite a few countries we’re interested in in all honesty, it’s just the logistics and making sure it’s the right time. I’ll give DNB Dojo a little world exclusive here, we’re organising one with Mean Teeth for Estonia, and we’re also looking to go to Italy next year now.

The music coming out of Italy is quite something at the moment, and from meeting all The Dreamers (the big crew out of Italy if anybody didn’t know) this weekend, which was incredibly special, we’re starting to draw up some plans…can’t say who’s confirmed yet, but yeah, it’s happening basically!

DD: Lifestyle has morphed a little over the years, with the current focus seemingly more on tech and neurofunk releases compared to deeper releases in the past (e.g. Y2D – Prose, a personal favourite from earlier days). Is this indicative of a shift in your taste in Drum & Bass, or are there other motivations at play?

LM: The label has certainly been through some changes. I (Peter Piper) only joined within the last four years, but Lifestyle has been going nearly nine years now. Felix who founded the label laid some serious groundwork, then he moved to my hometown, and we decided to work together, I’m even now a co-owner of the business. We made the decision to change the name of the label from Recordings to Music to signal a shift and the new direction we’d undertake, which is proving to be successful. I guess I’m just quite a sucker for a techy roller, that is my vibe, and Felix is the neuro man, so together we bring that different aspect.

We know we have certainly become known for a certain sound over the last few years, which we’ll still push, but we are now releasing music in our Culture series, the first of which was out in February; that series is more about the deeper, liquid side of the scene. Watch out for more coming there if that’s your thing…

DD: What’s next for Lifestyle after the LP release? Any releases or gigs you wanna shout about?

LM: Lots. It’s quite relentless at the moment, which we’re very fortunate for really, but it is quite a lot of work! In terms of releases we have Lifestyle Remixed Vol. 2 out after the LP which features remixes from Zero T, Ill Truth, Bass Brothers and Paradigitz, followed by releases from Lavance, Creatures, Melinki & Ill Truth (that’s about all I can say for now). In terms of gigs we’re off to Belgium at the end of the week for our album launch party in Antwerp (massive shout to SVB for everything he’s done for that) followed by a second Lifestyle night in Luxembourg the following weekend. We’ve also got a few nights in the UK starting to shape up, including our first ever Bristol event, and believe us, that one is not to be missed!

DD: Last up, give us the top three tracks you’ve been rinsing lately…

(Totally did just link all Lifestyle tracks, really not sorry)

Watch out for the Belgian Connection LP dropping May 31st at all good digital outlets; previews below.