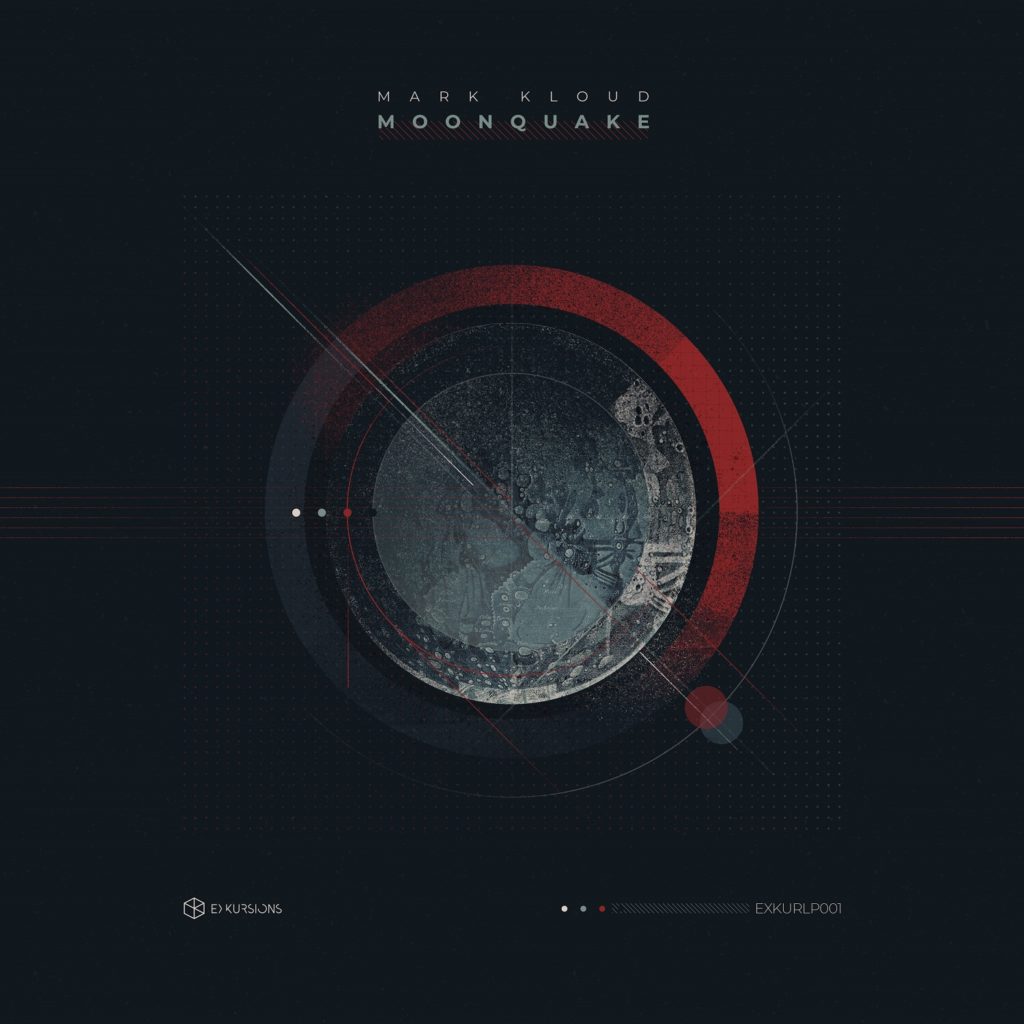 We’re big fans of Mark Kloud’s output here at Dojo HQ, and likewise big fans of the three-headed hydra that is Lossless Music / Exkursions / Dope Plates, so news that Mark would be dropping his debut album for Soul Intent’s esteemed outfit got us pretty excited. Read on for the lowdown on all things Moonquake, and check out our premiere of Sea Crest below!

DNB Dojo: Hi Mark, thanks for taking some time to chat! How are you doing today?

Mark Kloud: I’m doing good! Just trying to navigate through these trying times like everyone else. Hope you’re well too, it’s been a little while.

DD: So let’s dive into the Moonquake LP. Can you tell us a little about the title, and the story you’re telling in the album?

MK: Generally, I think it’s hard for musicians making instrumental music to put a title on work hence why one of the tracks on the album is Untitled. For me putting a name to work is based on my current feelings, inspirations and experiences.

Space has always been something that I’ve been interested in, curiosity of what is out there – the great unknown. About a year and half ago my family and I took a vacation down to Florida and we visited Kennedy Space Center – we learned a lot about the Apollo missions done by NASA. The data collected during those missions continue to be studied and in recent years it was discovered that the Moon experiences seismic activities similar to Earth with earthquakes. It’s fascinating that something so powerful and destructive on Earth is also happening on another planet that doesn’t effect us nor do we even know it’s happening.

Moonquake is an analogy, how I’ve been distant and quiet externally with my music but there has been things happening in my world – finally happy to share it.

DD: Sea Crest is a particular favourite from the album, I love the progression and the movement in the track. Could you elaborate on the inspiration behind it, and how it came together?

MK: That one is heavily inspired by late 90’s and early 2000s Techstep. Labels like Moving Shadow, Renegade Hardware, Prototype, Timeless, and specifically artists like Digital & Spirit, Loxy and Ink, Trace, Dom & Roland are big influences on me. If you go back to any track off the Loxy & Ink Quasimodo EP, they’re still relevant tunes. There are a lot of haunting tracks from around that time that I still love today. Generally, I enjoy creating those dark atmospheres – setting the mood and tone of a track with subtle synths, stabs and vocals. Those elements build an eerie mood and pressure which I wanted to drop into a deep, techy roller.

DD: The album (and your work in general) has a really cinematic quality to it. Do you have any favourite soundtracks that provided inspiration for the album?

MK: Yes, but not limited to the album – general inspiration I’d say. I think the most obvious is Hans Zimmer, specifically his work on Dunkirk, which has landed in my list of top favourite movies. There were times in the movie where I questioned certain sounds – “Are those guns or the propeller from the plane?” But it was part of the sound design created by Zimmer to build the tension in those scenes. That “ticking” is a common trait in his compositions that he also used in Interstellar. I’ve also been inspired by Jóhann Jóhannsson (Arrival, The OA), Trevor Gureckis (Servant, The Goldfinch) and most recently Ben Frost with his work in the Netflix series Dark. Some other inspiring musicians/composers for me that aren’t making music specifically for cinema but take on a cinematic approach are Tim Hecker, William Basinski and Rachel Grimes.

DD: I understand that Alex Soul Intent suggested you do the LP for Exkursions, following your release for his Dope Plates imprint in 2018. How was the process of making the LP? Is there a creative pressure associated with a bigger release, compared to say writing an EP?

MK: There’s always pressure when asked to do a release. Since this was a long player, yes, even more pressure but self-inflicted pressure. When working with Alex, there’s no pressure coming from him, there was no sense of urgency. I worked at my own pace and I have to since I have a full time job and a family. My day job as a designer can be creatively draining, though it’s a different medium, they’re closely related. It’s hard to maintain a steady output of creative work. Over time I began to realise when and how to take breaks, allowing my mind to work differently on other types of projects.

During Moonquake I took my time, slowed down the process a bit – put tracks aside that I would be stuck on and worked on other tracks. It really isn’t too different to how I have been working on music over the last few years. I appreciate any time I get to work on music, therefore I’m more focused. Some of the tracks on the album had been in the making prior to Alex and I talking about the LP but once I started finalising and grouping them together, they organically built up to a cohesive body of work. The majority of the album sits within 170 BPM yet takes on a wide range of styles which is something I enjoy exploring. Moonquake is a perfect fit for Exkursions being the part of Lossless Music’s catalogue giving artists the opportunity to explore and experiment. Alex is really honest and straight forward, making sure to let me know what he felt works and what doesn’t. It was a great experience, working with him and I’m extremely grateful for his trust and patience during the process.

DD: We’re living in quite a strange time just now. How has the state of the world affected you, creatively speaking? Did it affect the album, or were the tracks all fairly complete before the pandemic hit?

MK: The album was wrapped up when the pandemic started, which was a good thing for me. Since late March I began working remotely for my job and as things began to worsen in the States, the majority of my team and company have been placed on furlough. It has led to working long days and weekends, not allowing much time to work on music, and also being creatively drained like I mentioned before.

There is a series of ambient pieces I have been working on for some time that was recently revisited over the past couple of months. I think it has developed into a reflection of the isolation most of us face. Out of the music projects I have it isn’t a priority but it’s one I’d like to complete soon.

I think we are starting to see and will continue to see great music and art coming from this time period. I believe we have already seen some direct and indirect movements spark from the pandemic but I’m hopeful that it will create a large artist movement, resulting in a greater appreciation of the arts.

DD: With the LP delivered, have you taken a breather, or have you dived straight into other musical projects?

MK: When Moonquake was finalising I started working with Brian at Translation Recordings on an EP, pretty much in the final stages of that one which is exciting. Other than that series of ambient tunes I mentioned there are always an array of on-going projects – just need to find the time to finish them.

DD: Your Ground Mass / Air Mass imprints have been quiet for a while now. Are there any plans to bring them back? You put out some great releases over the years, so we’d love to hear more!

MK: Thanks! I’m not really sure but I’ve been struggling with it a lot lately. It’s been on hiatus really because I haven’t had the time to do anything with it. The last couple of years I decided to put more focus and attention on my career which has limited free time and therefore the label has be inactive. I think I’m afraid if I start it back up it won’t have the momentum it gained previously and it will require more time than I can give at the moment. If anything I could see it as a platform to release some of my own unreleased material. Regardless of what the future holds, I’m extremely grateful for the connections that were made and proud of all the releases.

DD: Last up, any shout outs?

MK: Much love to my biggest supporters: my wife Laura and three kids; Jade, Ava and Ethan – for putting up with the endless thuds of bass and creepy noises sneaking its way up from the basement of our home. Many thanks to Alex for giving me the opportunity to put this album together – without him, Moonquake wouldn’t exist. To all of my past and present colleagues and collaborators within art, design and music worlds – our interactions and experiences have helped me become who I am today. And to all who have supported my music over the years – THANK YOU!