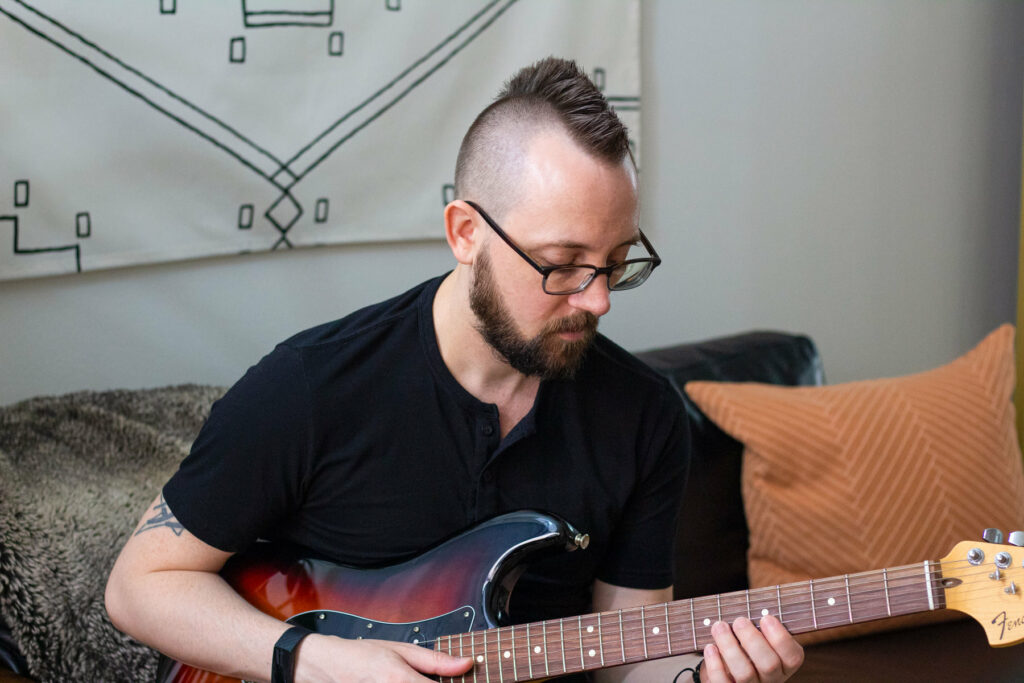 Since bursting onto the scene in 2015 via EPs for Silk Recordings & Blu Mar Ten Music, Akuratyde (aka Dan Eshleman) has moved from strength to strength with more releases on BMTM, frequent collaborations with Monika, new projects in the form of 3VS and Vex Seven and starting the excellent Modern Conveniences imprint. He returns to Blu Mar Ten Music this month with his second LP Home Movies, so Hex grabbed a few minutes of his time to dig into the album, collaborations, studio gear and more.

DNB Dojo: Hey Dan, thanks for taking some time out to chat. How are things with you over in LA?

Akuratyde: Busy! Thank you for asking. If you follow my Instagram page you know that my wife and I are expecting our first child in August. On top of that we’ve bought a house and we’re moving in July so it’s pretty hectic right now but also very exciting.

DD: Home Movies is your second album for Blu Mar Ten Music, coming after a little break from the label with most of your releases landing elsewhere over the last two years. What made you decide it was time for album #2, and what influenced the decision to release via BMTM?

A: BMTM has been my favorite label for a long time so when I began work on Home Movies they were really the only label I had in mind for the project. Chris is very focused on keeping the quality high and he does an amazing job at giving guidance and constructive criticism. I respond really well to that type of feedback so it’s always a pleasure working with him.

DD: Chris’s press release describes the album as “a melancholy reflection on [your] younger years and a comment on modern culture’s obsession with surface and gratification”…could you expand a little on those themes and the inspirations that went into the record?

A: My music has always been very autobiographical. I’m putting so much of myself into my music, connecting with memories and emotions, that each song usually ends up being about something important to me. Past Lives was about reflecting on the loved ones I’d lost over the years as well as the changes my own life had gone through. With Home Movies I wanted to broaden that focus. Having a son on the way has caused me to think about my own childhood a lot. It’s made me long for the simplicity of youth a bit. Things will never be as easy as they were when we were children.

In reflecting on my youth I began thinking about how entitled and complacent our society has become. We have technology that would have been incomprehensible 40 years ago yet we completely take it for granted. I thought about the evolution of the home video recorder and how it was so rare and such a privilege to watch yourself on film as a kid. It was special. Now everyone just films everything on their phones and uploads it to YouTube. Sometimes it feels like special moments are harder to come by. A lot of people are trying to project an image of authenticity but how authentic is that really?

I know this might comes across as “old man yells at cloud.jpg” but I think it’s really important to be aware of the impact technology is having on our lives and make an effort to disconnect a bit more. I’m not immune to it either, I’m on my phone all of the time, but I’m making an effort to put it down when it really matters and live in the present more.

DD: There’s a nostalgic quality to a lot of the music here (and indeed a lot of your music in general) – it kinda reminds me of artists like Boards of Canada, albeit filtered through quite a different style. Would you say you’re a nostalgic/reflective person?

A: Yeah, I am. I’m always keeping an eye on the future and trying my best to plan ahead but I enjoy reminiscing and doing self-reflection. I think a lot of us are trying to find ways to connect with memories of our youth when life wasn’t so challenging and complicated, especially with what’s been happening in the world since the pandemic began. I also happen to connect with melancholic music the most. I like songs with all different moods and energy but the ones that stick with me tend to be deeply melancholic so it’s natural I’d want to bring that sensibility into my music.

DD: We’ve all been through quite a strange time over the last year. Was Home Movies written during the pandemic, and if so how did that influence the writing process?

A: For the most part it was. After Past Lives came out I ran into a bit of a wall creatively. Creating my different projects (Monika & Akuratyde, Vex Seven, and 3VS) really helped me get out of that creative rut because I’m no longer trying to cram everything into a single box. Toward the end of 2019 I decided to write another Akuratyde album and I’d finished two songs when lockdown started. A couple of the songs can also be traced back to sketches I had started years ago and never finished but the bulk of the album was written during 2020.

Lockdown obviously affected everyone very differently but for me it was a period of intense creativity. I think I’m at my most creative when emotions are running high, whether I’m feeling great or completely miserable. I struggled a bit writing Past Lives, which is why there’s such a long gap between Embrace and that record, but Home Movies came together relatively easily by my standards.

DD: The title track on the album is a collaboration with Whytwo (who I’ve met once or twice here in Scotland – big up Alex!). How did that link up come about, and what was the collaborative process like?

A: I reached out to him on Instagram and asked if he wanted to work together on a tune. I really liked the song Armour which he released on Med School so I thought it would be a fun collaboration. It was pretty effortless actually! The song began with a sketch I sent him and he really expanded on my ideas and wrote parts that beautifully complimented what I’d written. I hope we work together in the future because it was a really enjoyable experience.

DD: You’ve also teamed up with vocalists for a couple of pieces on this record…how did you go about choosing singers to work with, and how were the lyrics written?

A: I met Oktae through Monika. We’ve released three Monika & Akuratyde songs with her. She’s incredibly talented and such a pleasure to work with so she seemed like a natural choice for my second album. David Pittman is one of my closest friends, he lives here in LA and he’s been singing for as long as I’ve known him. We actually recorded these vocals at my home several years ago but I couldn’t seem to get the music dialed in correctly so I revisited this song while I was writing the album and ended up rearranging it quite a bit.

Regarding the lyrics, I can’t speak for them since they both wrote the lyrics without any input from me but I’m really happy with how both songs turned out.

DD: On a slightly geekier production note, I’ve always found the warmth and character of your sound mesmerising, particularly the synths and the way you treat guitar. What are your go-to pieces of studio kit, software or hardware?

A: Thanks mate. These days I’m using mostly hardware synths. I have a lot of the Roland Boutique synths and my go-to’s are definitely the JU-06 and JP-08. I also have a Prophet 12 which is all over this album. For Home Movies I also added the Korg Modular which is heavily featured on the song Modern Conveniences.

On Past Lives all of my guitar FX were done in the box so for Home Movies I wanted a proper pedal setup. I’ve added two delays, reverb, chorus, looper and distortion pedals. I experimented with a lot of different guitar tones and textures for this album. As for software, I’m big into reverb. I spend a lot of time sculpting my own reverb presets to give my music that really dreamy quality.

DD: Last year you also started up your own label Modern Conveniences, which feels quite refreshing in terms of its sonic direction and coherence (sidenote, I love the artwork too). Given the relative saturation of small labels in the scene, what made you decide to start your own?

A: Over the years the tastes of the 170 community have really changed and the producers have taken the music in a very dark, aggressive direction. That’s not a slight against that style of music, I write that style under my Vex Seven alias, but it’s left a pretty big hole for the melodic autonomic that I fell in love with in 2009 and which inspired me to start writing music as Akuratyde.

With Modern Conveniences I’m trying to highlight the musicians who are pushing melodic forward thinking autonomic and halftime drum & bass. I’ll venture into the darker territory with the label here and there but the main focus will always be on melodic music. I’ve received a lot of messages from people thanking me for keeping this sound alive so it’s great to see it resonating with people and hopefully it will continue to grow.

DD: What are your plans for the rest of the year and beyond, both for Akuratyde and for Modern Conveniences?

A: As far as Akuratyde goes I don’t have a lot of plans for 2021 beyond this album. With the baby and the move coming so soon my attention is mostly going to be elsewhere. I do have an ambient tune coming out on a compilation later this year. I’ve also finished an ambient album which will be out in early 2022, and of course I’ll have releases here and there from my various side-projects.

With Modern Conveniences I’ve mapped out the release schedule for the rest of the year and there are some really exciting releases on the horizon, and some artists that you may (or may not) be surprised to see on the label!

DD: Last up, I have a hunch that you’re a fan of film soundtracks…assuming I’m right, what are your top 3?

A: Absolutely, I love film scores. For me music can have such an impact on the emotion of a scene when it’s done right. Keeping with the nostalgia theme I’ll say Cliff Martinez’s score for Solaris, Vangelis’s score for Blade Runner, and James Horner’s score for Aliens.

Home Movies is out now via Blu Mar Ten Music – check out the clips below and head to Bandcamp to grab the album and support the label directly.